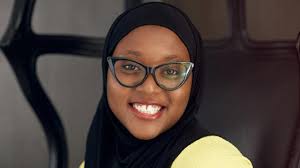 Hauwa Ojeifo, 26, was named one of the winners of  the first MTV Europe Music ‘Generation Change’ award.

Hauwa Ojeifo  is the founder of ‘She Writes Woman’ and ‘Safe Place’, the first 24/7 mental health crisis helpline and the first anonymous women-only mental health support group in Nigeria.  Ojeifo’s mission is to positively influence the misinformed narratives mental health and sexual violence conversations have in Nigeria.

The mental health activist was awarded at the 2018 MTV EMAs pre-show held at the Bilbao Exhibition Centre, on Sunday in Bilbao, Spain.
The newly introduced MTV EMA Generation Change Award was created to elevate and empower the fearless, original young people who are changing the world.

Hauwa who was  nominated alongside Xiuhtezcatl “X”Martinez, Sonita Alizadeh, Mohamed Al Jounde, and Ellen Jones. MTV EMA will sponsor all the winning charities, including hers!

Hauwa shared a video of herself watching the show live, revealing that she couldn’t make it to Bilbao due to visa issues. She wrote ”We won!!!! We ALL won!!! Gosh!!! Thank you to everyone that voted! Thank you so much!!! So incredibly humbled by this. And yes, as you can see, I couldn’t make it to Bilbao. See next post for why
But for now, Alhamdulillah!!! I’m in such good company and I’m so happy to be awarded alongside such amazing young people disrupting, improving and creating a safer world for us all! We all definitely deserve it. Thank you ALL!!!!
Thank you so much @mtvema!!! Thank you for putting mental health, She Writes Woman and Safe Place on a world stage. WooHooooooo!!! We are GENERATION SAFE babyyy!!!”