Popular South African rapper, Kiernan Jarryd Forbes popularly known as AKA, took to his twitter page to tell fans to stop attacking the South African Hip Hop Awards, The popular award show just released  a list of nominees for the upcoming show and it looks like fans were angry when AKA was missing. The rapper is popular among the public and he recently dropped an album titled, Touch My Blood, so it was a shock for everybody to see that he was ignored. This is his fourth album and he continues to shape South African hip-hop.

The list of nominees fot the SA Hip Hop Awards 2018 was released earlier today and once fans noticed AKA was missing, they lashed out, see some reactions below-

#SAHHA2018 If These are South African Hip Hop Awards why is AKA and Areece not nominated? pic.twitter.com/DgcAlLLuTO

#SAHHA2018 are becoming a every year joke,how do you keep @reece_youngking @akaworldwide @MashBeatz_TWC out and say Hip Hop Awards,ninjas you can’t sideline the best rapper and producer out??????

AKA took to his twitter page to explain things to his fans and calm them down, see post below- 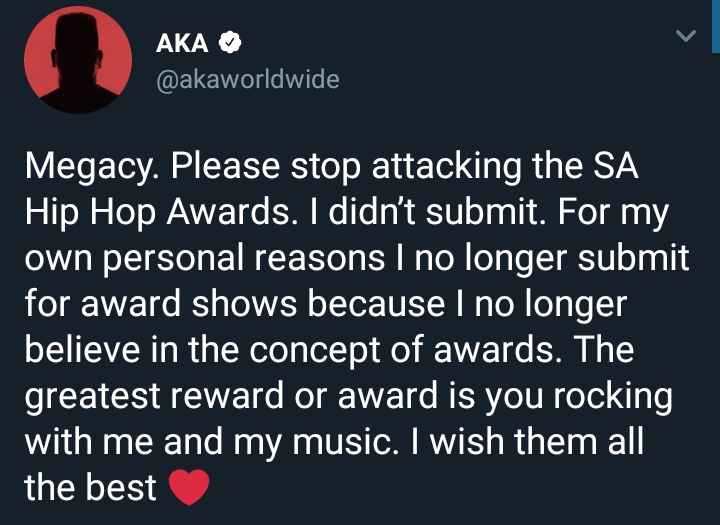 AKA tweets on awards

Our son the minister