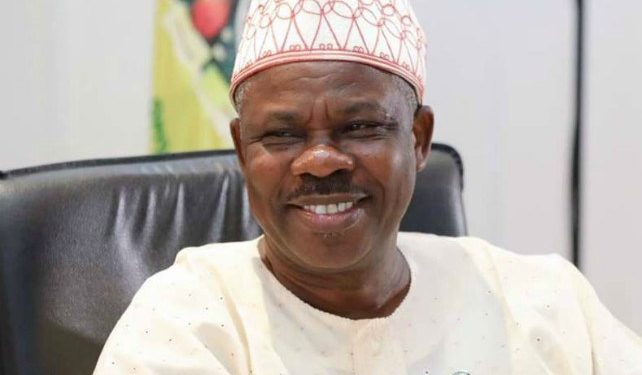 The governor of Ogun state, Ibikunle Amosun who is still not pleased at the turn of events has accused All Progressives Congress (APC) National Leader Bola Tinubu and former governor of the state Olusegun Osoba of writing fake results for the state’s primary elections.

Founder and CEO of Heyden Petroleum, Dapo Abiodun‘s name was submitted as the party’s gubernatorial candidate for the 2019 elections but Amosun claims Adekunle Akinlade won the governorship primary.

Amosun, speaking to journalists shortly after swearing in the state’s new chief judge, Justice Mosunmola Dipeolu said that if the APC NWC or Chairman Adams Oshiomhole say “there was an election in Ogun state, it’s all fraud.”

According to Vanguard, Amosun said:

The President already knows there was no election in Ogun State. He knows that they just went to Lagos, wrote all results and that what they did is fraud.

If the National Working Committee or the National Chairman said there was an election in Ogun State, it’s all fraud. That is what I said.

Mr President already knows, there was no election in Ogun State, other than the one we held. The issue of Chief Osoba and Asiwaju (Tinubu) and co, what we said was that there was a deafening silence from their end and silence means consent. You can record me and publish it out in your newspapers.

We have not heard one word from any of them. Was there any election in Ogun State? Yes or No? They should come out and those that are hiding behind one finger, they cannot come out. People at this level should be courageous enough to take position, to come out , to come and tell us whether there was an election.

On Governorship, the day they said they did it or not, the one that we had, there was live telecast, people even witnessed. They all came that they are changing again. They removed Leke Adewolu, Mikail Kazeem. All of those ones are nothing but fraud.

Speaking to Guardian, Osoba said: “I don’t want to be dragged into that issue. There is no basis for me to react to it.”

Tinubu’s media aide Tunde Rahman said if necessary, a response will be made later.

Man Arraigned In Court By Custom For ...