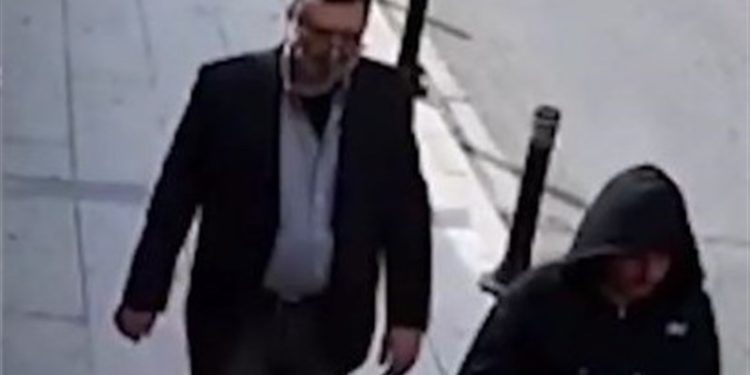 According to footages obtained from Turkish surveillance, a member of the 15-man team suspected of the brutal murder of Jamal Khashoggi dressed up in Khashoggi’s clothes and left the consulate through the back door.

The surveillance footage, obtained and released by the Turkish government’s investigation shows the man leaving the consulate through the back door, while wearing a fake beard. possibly in a bid to look like Khashoggi. He also wore the deceased clothes and glasses.

The man, who have been identified as Mustafa al-Madani was at the city’s world-famous Blue Mosque just hours after the journalist was last seen alive entering the consulate on October 2. Madani is believed to be part of the team of hit men imported from Saudi Arabia to kill Khashoggi.

Khashoggi went to the consulate to collect his divorce papers so he could marry his Turkish girlfriend.

Madani, 57, who of similar height and build to Khashoggi could have passed as the deceased reporter and according to the video was brought to be consulate to act as a body double.

The latest news further renders Saudi’s explanation that it was an interrogation gone awry obsolete.

“You don’t need a body double for a rendition or an interrogation,”a Turkish official said.

“Our assessment has not changed since October 6. This was a premeditated murder and the body was moved out of the consulate.”

CCTV showed Maldani entered the consulate alongside an accomplice four hours earlier, without all the disguise and dressed in blue and white shirt and dart trousers, but exited through the back door dressed in Khashoggi’s clothings. The only thing that remained was his sneakers.

This comes after several weeks of denial by Saudi officials including the crown prince who initially insisted the journalist walked out of the consulate – and had probably planned on using the body double as evidence. They later changed their narrative that it was a rogue agent that carried out the murder, until finally, the acceptance that he died at the hands of their agents after an altercation in the consulate.

Fayose To Be Arraigned Today For Alleged ...

Nnamdi Kanu made no appearance in Jerusalem ...