AREGBESOLA STOMPS THE STREET TO CELEBRATE WITH HIS NEW SUCCESSOR

It has been jubilation upon on jubilation for members of APC in Osun state. The sitting governor of Osun state, Ogbeni Rauf Aregbesola, and the newly elected governor, Isiaq Gboyega Oyetola, stomped the streets of Osogbo in style, to celebrate their contentious victory over PDP in the just concluded elections. 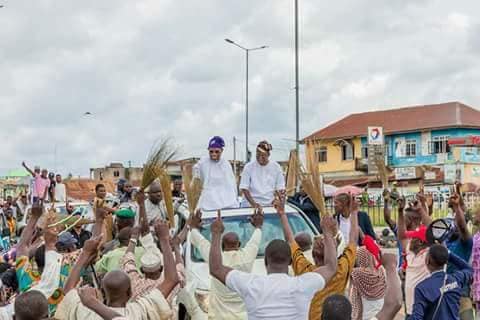 They took to the street to appreciate the people for voting APC back into power. This happened after the Juma’at Prayer at Osogbo Central Mosque. Some people were seen on the streets waving at the governor and his elect, for their victory at the polls.

INEC declared the candidate of the All Progressives Congress, Gboyega Oyetola, the winner of the Osun governorship election after a rerun between him and PDP’s Ademola Adeleke.