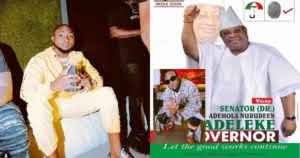 Multiple award-winning popstar, Davido has reacted to the now viral reports that the Economic And Financial Crimes Commission, EFCC allegedly froze 7 accounts belonging to his family, the Adeleke’s.
Davido’s Uncle, Ademola Adeleke is contesting in the upcoming Osun state Gubernatorial elections.
Reacting to the development in response to a question from a fan davido wrote;
“Make dem go Wells Fargo for ATL na”.

This development is coming days after the singer announced that he will be actively taking part in the campaigns for his Uncle.
Davido was quoted as saying, “I, Davido Support Sen. Nurudeen Ademola Adeleke as Governor, Osun State”.