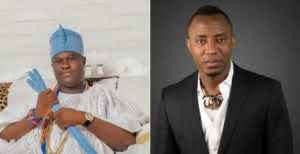 Presidential aspirant and Sahara Reporters publisher, Omoyele Sowore, was attacked today at the the Palace of the imperial majesty, the Ooni Of Ife. This is following claims that he refused to prostrate at the palace.
According to an eye witness report:
‘Sowore was teargassed at the Ooni of Ife Palace today, Three People fainted and when he came out, there were thugs over the place and they were attacking. Students fainted’.
Confirming the development, Sowore tweeted:
‘We are safe after an attack at the palace Of the Ooni Of Ife’. He then went on to make a video explaining how it happened.