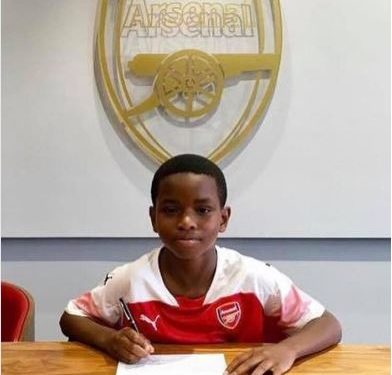 Arsenal have signed a nine-year old Nigerian wonderkid, Jayde Adetiba into its academy.

The nine-year old who was born in Nigeria, but has lived in South Africa for some years was signed after impressing during a five-week trial with the North London club.

The wonderkid had been playing for the SuperSport United Soccer in Cape Town.

Adetiba. who is also an Arsenal fans says he is very happy and plans to play for the Arsenal first team in the future.

Speaking to the Sun, he said: “I thank God and my parents for this,”

“I am very happy. I train three times a week at the academy and we have a match at the weekend.

“The amazing thing is, I have always been an Arsenal fan and I will work hard every day to make the first team.”