Omotola Jalade wins her first AMVCA award at the AMVCA 2018 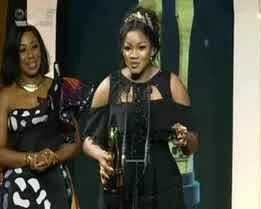 Veteran actress, Omotola Jalade Ekeinde emerged the best actress in a drama/TV series in the AMVCA 2018.

The actress who is known to have won many awards in the past, made a shocking revelation on receiving the award. According to her, its the first AMVCA she will be receiving.

Folarin Falana, popularly called Falz carted home the award for Best Supporting Actor in a Movie/TV Series’. Odunlade Adekola won best actor in a comedy and Femi Adebayo won the award for best indigenous movie, defeating his father who was nominated in the same category. Congratulations to the winners.