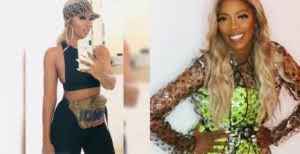 Famous female Nigerian Pop Singer, Tiwa Savage who just headlined her first sold-out UK concert has revealed that she might drop another album this year 2018.
Tiwa revealed this during an interview session with “Grape Juice” in London.

The singer said she had made too many songs so far this year and thinks it’ll be a good idea to compile them into an album.
She went further to say the upcoming album will not feature too many artistes, it’s going to be simply her because she had done that with her past albums.
She also said she would love to see Bill Gates at her concert, for his cheque, also Nelson Mandela, just to hear his feedback on her music.
She talked about her next single during the interview, how she juggles motherhood with her career, Wizkid, Roc Nation, Ciara and Mavins.