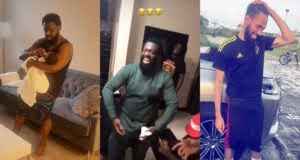 Nigerian music star, Timaya who has had three children from two baby mamas, recently disclosed that he is done making babies. He was also spotted in a video advising Phyno and others about marriage.
In the video which is now making rounds on social media, Timaya was seen with Paul Okoye saying ‘if marriage doesn’t work, just have babies.’

Chibuzor Nelson Azubuike, better known by his stage name Phyno, is a Nigerian rapper, singer, songwriter and record producer. He started his musical career as a producer in 2003. He is renowned for rapping in Igbo language.