Popular Nigerian self-acclaimed male barbie and cross dresser, Bobrisky in an interview with Sunnewsonline, has declared that he has a girlfriend who isn’t based in Nigeria.

Read excerpts from the interview;

So how did you become a crossdresser?

I’m from a polygamous family. My dad married three wives. My mum is the last wife with three children. My parents had issues at some point and my dad said my mum could go with her children. It was later agreed that my brother and sister should stay with my dad being the older ones while I lived with my mum. She sent me to primary and secondary schools. I went to Kings College and University of Lagos, where I studied Accounting. Before I gained admission into Unilag, I lost my mother in 2008. She was a Muslim; actually she travelled for Hajj and died there. This made me to go back to my father’s house.
While living with my mum, I learnt business tactics from her. She sold lace and other textile fabrics in Lagos Island. I used to go to her shop on Saturdays to help out. Shortly after moving to my dad’s house, I gained admission into University of Lagos to study Accounting. In my 200 level, I started trading. I sold clothes to my friends and hostel mates. But I wasn’t making money the way I wanted. I sat down one day and told myself that I wanted to become famous. My dream has always been to become famous and controversial. I said to myself, ‘I want to make money from my trade, so what can I do? I started having different plans.
Since I do more of make-ups, sell female and male clothes, I decided to do crossdressing to draw attention. ‘If I start crossdressing, it would sell me out there. It would draw people’s attention’. That was how I became so famous. People were like eeeh, is this one a boy or a girl? What is going on, he’s a boy oh, no he is a girl oh. My plan worked. I became controversial. I started selling creams, clothes, and make-up in a large quantity. From there, I started making money. I got a store on the mainland selling clothes. After then, I got a bigger shop in Lekki Phase One, where I still operate my cosmetics business till date.
The journey has not been easy. People call me names, oh, he’s gay; he’s this, he’s that. Nigerians have this attitude when they see a man acting like a woman or doing female stuff. They tag him gay. But we all have our plans and aims laid out. I wouldn’t want to be a kidnapper, a thief, or a fraudster in the nearest future, so, I’m using what I have to get what I want. I thought of what to do to make cool cash and become famous and that’s why I became Bobrisky. The name came about because people were calling me Bobo, saying that wearing women outfit as a guy is a risk. It takes a lot of courage to do that. So, I took Bob from Bobo and added risky. That was how I became Bobrisky. Social media is full of tales of Bobrisky. Bobrisky did boobs, Bobrisky did ass; all these things are controversial nonsense. 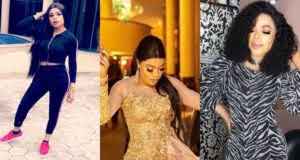 Do you have a girlfriend?

Yes, I have a girlfriend and she lives in London. My girlfriend understands the game, I made her understand and told her not to get distracted with what she hears about me.