Bush and Obama Expected to Speak At Senator McCain’s Funeral, Trump Not Invited

According to CBS News, Sen McCain before his death asked former presidents Barack Obama and George W. Bush speak at his funeral, to offer eulogies and this has been confirmed by two unnamed Republicans familiar with the funeral schedules.

Meanwhile, McCain’s wish that Trump not receive an invitation to his funeral, made public some months ago, remains unchanged upon his death. 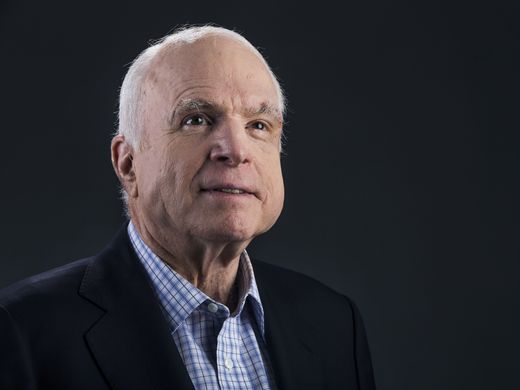 In a statement on Saturday, Obama saluted McCain’s “fidelity to something higher – the ideals for which generations of Americans and immigrants alike have fought, marched, and sacrificed”.

Bush praised a “man of deep conviction” and a “public servant in the finest traditions of our country”.

According to his official website, Sen. McCain will be laid to rest at the U.S Naval Academy Cemetery in Annapolis, Maryland although the funeral schedule will be announced later.

Sen. McCain, the former POW and outspoken Republican politician nicknamed The Maverick for being unafraid to disagree with fellow members of his party, said on 60 Minutes in September 2017 that he wanted a service at the Naval Academy.

“I want, when I leave, that the ceremony is at the Naval Academy,” he shared. “And we just have a couple of people that stand up and say, ‘This guy, he served his country.’”

The American flag is flying at half-staff at the White House as funeral plans are underway for Sen. John McCain.

This evening, the @WhiteHouse flag has been lowered to half-staff in honor of Senator John McCain… pic.twitter.com/tYdBNK9bA7

Sen. McCain, who graduated from the Naval Academy in 1958, described the location in his 2018 book The Restless Wave: Good Times, Just Causes, Great Fights, and Other Appreciations, calling it “a beautiful spot” close to where his and Larson’s “paths first crossed.”

MERCY AIGBE AND DAUGHTER MODEL FOR THEIR ...