Ex-Big Brother Africa Star, Pokello Reveals The Craziest Thing She Ever Did Over A Man

Former Big Brother Africa contestant, Pokello Nare has opened up on the craziest thing she ever did over a man. 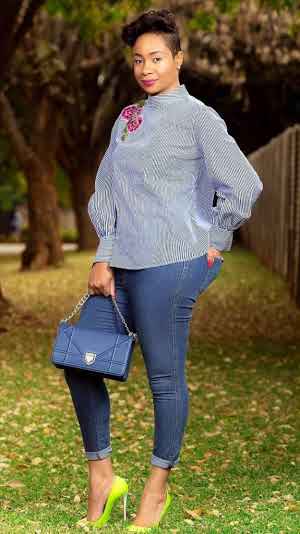 The Zimbabwean socialite and business woman, revealed how she pulled up unannounced to her then boyfriend’s house only for him to show up with another woman.
She wrote:
“In varsity I was dating this guy who worked on TV. I was young and taking everything for granted. He found out I was still talking to my ex and the guy was actually on his way to SA to see me. So he really got into his feelings and cut me off.
EX came down and as usual an EX will always disappoint you with the same mess you left them for in the first place. After that hard fall from heaven, I decided to get my man back. That guy had blocked my calls and texts (we didn’t have WhatsApp back then).
I wasn’t coping at all, first time in my life I was not in control of my own self. I remembered I still had the keys to his house and had a friend who lived in the same complex.
So I asked my friend to open for me. Ran the scenario with my bestie Thabi and she approved it. So I drove my car out there, told security I was going to my friends, they let me in and I parked my car in her parking space. I stayed in her house exactly 5 mins and proceeded to his. Let myself in and switched on the Telly, to see if he was still on Air. Once the show finished I knew it would take him exactly 30 mins to get home.
I cleaned up the place, (you know you need to make your return in Grand style) I heard his car pull up and I switched off the lights coz hey it’s meant to be a surprise right. As the front door opens I hear him talking to someone, then the sound of heels. He switches on the bedroom lights and there I am standing and there he is with a girl wearing a white dust coat behind him (like what? Was she meant to be a doctor or something?) I completely lost it, things went from 0 to 100 real quick.

He is asking what are you doing here and I am asking who is she? Listen, I grew up watching Sean Micheal and Hulk Hogan ok, so I’m a different kinda crazy. I’m throwing upper- cuts and round house kicks and he is trying to restrain me. Manages to take ‘the doctor’ outside and calls security to ask how I got in.
They are equally surprised to see me in there coz I said I was going to another apartment so now they are all trying to ‘escort’ me out. I kicked every person in that apartment until they had to call the police on me.”