TIME Magazine’s Latest Cover Shows Trump might be in Trouble

TIME Magazine has released another amazing cover – an illustration which it says depicts U.S president Donald Trump‘s current situation.
The cover shows the president of the Unites states, neck-deep in water with the background, an obvious recreation of the oval office. 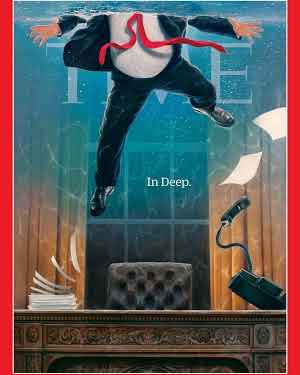 The edition titled In Deep, focused on Trump’s continued scandals.
The cover story titled “Trump Is in Trouble. Here’s How Much Worse It Can Get” discusses Trump’s former campaign chairman Paul Manafort being found guilty on eight counts of financial crimes and his personal lawyer Michael Cohen pleading guilty to eight felony charges on the 21st of August.
Trump’s most immediate peril may not be on the legal front. Justice Department guidelines restrict prosecutors from bringing charges against a sitting President–he can be indicted only after he leaves office. But the political toll of the mushrooming scandals is another matter.
The latest illustration by Tim O’Brien is the third in the sequel-like covers which first made headlines in February of 2017. Another followed shortly in April 2018 before this.