Nigerian Men Arrested With Grams Of Heroin In India

Khanna Police, Ludhiana district of Punjab, India has nabbed four Nigerian nationals in the last few weeks as part of the campaign to combat trafficking.
The latest suspect identified as Traurare Yakubu was arrested on Wednesday, August 21. Ub Inspector Davinder Singh along with a police party stopped the suspect, frisked him and found drugs in his possession.
The police recovered from him 100 grams heroin worth Rs one crore and also confiscated seven grams of cocaine. He was arrested immediately. 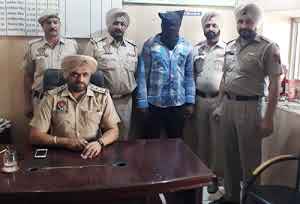 Continuing the drive against Drug Smuggling, Khanna Police achieved a major success, arrested a Nigerian man and recovered 400 gms heroin from his possession.

In this regard, a case FIR has been registered under NDPS Act PS Machiwarra Sahib. Further investigation is on in this case.
Khanna Police under Senior Superintendent of Police, Dhruv Dahiya started a special campaign against drug trafficking and it is proving to be a success.