Nigerian Senate President Bukola Saraki has said he is considering running against President Muhammadu Buhari during next year’s election in February. 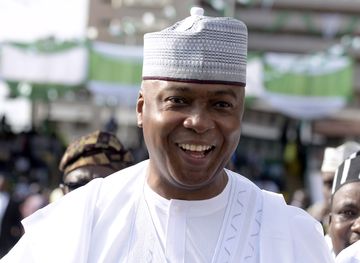 In an interview with Bloomberg, the former Kwara State Governor said he is actively considering the idea.

“I am consulting and actively considering it,” He said.

“I believe I can make the change.” He continued.

Saraki who recently defected from the ruling All Progressives Congress (APC) to the Peoples Democratic Party (PDP) also revealed that were he to run, it would be under the umbrella of the opposition party, PDP.

Saraki’s departure from the ruling party last month, although a badly kept secret, was also the catalyst for many more high profile defections from the party to the PDP. Saraki has been at loggerheads with the President since the former orchestrated his own emergence as Senate President against the President’s wish in 2015.

Their disagreement also culminated in the siege of the National Assembly by members of the DSS last week – a move which cost Lawan Daura, the head of the DSS, his job. The President has since denied knowledge of the operation.

He said regarding the matter:

“There has been a persistent disregard for due process and a lack of neutrality for some of these issues. For you to have credible elections, you must have safe elections. Security agencies are actively getting involved in the politics.

“The fundamentals of whatever we are going to develop is going to be based on sound democracy, credible elections, freedom of choice of Nigerians. If we don’t have that as a foundation, then everything else cannot happen.”

Saraki ois banking on the loss of confidence of most Nigerians on the Buhari administration and his own emergence as a viable alternative.

Saraki will still need to win the PDP’s ticket in a primary scheduled for October 5 and 6. He will run against former Vice-President, Atiku Abubakar, who also defected form the APC to the PDP, having left the PDP for the APC initially.

Asked while he choose to go back to the PDP, Saraki said:  “The PDP has learnt its lesson from the loss in 2015, and I think unfortunately the APC did not learn from their victory.

“We listed a number of issues. We talked about how to sustain and improve the fight against corruption; the issue of providing more powers to the states; inclusion and having a more nationalistic approach on things we do; to continue to improve the environment that will ensure investments. We listed a number of items during the discussions with the PDP, and there is a written agreement to that. We trust that we can hold them to that.

“We would ensure that the party is strong on security. The APC too have not done well on the issue of security. We have the opportunity with the right kind of presidential candidate and president to provide the leadership for the party. The party has a good opportunity to lead the country in the right direction.”