Today is Davido’s manager, Asa Asika’s birthday and his girlfriend, billionaire daughter and disc jokey,DJ Cuppy took to her Insta stories to celebrate him.
Asa Asika has been in a relationship with DJ Cuppy for just about a year but both were rumored to have dated or have a relationship in the past before now. 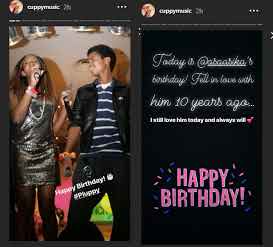 However today, posting a series of throwback photos and videos, DJ Cuppy revealed she fell inlove with him 10 years ago despite the fact they started dating in 2017.