The actor in a recent tweet suggested he could be the next 007 – James Bond. Days after reports that a producer of the franchise is tipping him to be 007, he posted: “My name’s Elba, Idris Elba”. 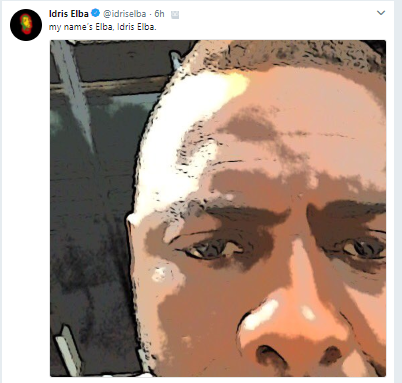 There’ve have been rumours since 2014 linking Elba to the Bond role which he’s neither affirmed or denied. His new tweet have fans taking it as a big hint that he could be about to take on the role when Daniel Craig leaves next year.

Elba, 45, who is best known for his roles in Star Trek, Luther amongst others has in the past explained that he’s too old to take on the famous role. However, he’s never shied away from the speculation and has said he “feels like a national treasure” being associated with Bond.

Few days back, reports has it that Bond movie boss Barbara Broccoli had said “it is time” for a non-white actor to take on the role. Speaking to the Daily Star, director Antoine Fuqua said that Broccoli had told her that she felt that a black actor in the famous role “will happen eventually”.

Barbara is the daughter of Albert “Cubby” Broccoli – one of the men who started the official Bond film franchise in the 1960s with Sean Connery in the role.

The next Bond which is due for release in October 2019 is directed by Danny Boyle and it’s likely to be Daniel Craig’s last of the Bond series, fulfilling his five-film contract.

Craig was the sixth actor to take on the role after Sean Connery, George Lazenby, Roger Moore, Timothy Dalton and Pierce Brosnan.