The hip-hop star was stumped when TV host Jimmy Kimmel asked him about his support for President Donald Trump. Kanye West who is usually verbose was lost for words when Kimmel asked him why he thought Mr Trump cared about black people, “or any people at all”. 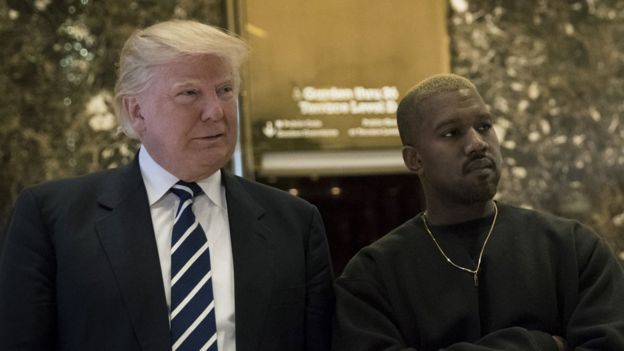 Kimmel refered to West’s famous claim from 2005 that President George W Bush “doesn’t care about black people”, and asked the superstar: “What makes you think that Donald Trump does – or any people at all?”

Kanye has previously called Trump “my brother” and said they shared the same “dragon energy”. On the interview, Kimmel asked why he had decided to endorse Trump publicly, West said he hadn’t wanted to succumb to pressure to take the predictable option.

“As a musician, African-American… everyone around me tried to pick my candidate for me,” he said, suggesting there was a perception that “blacks can only be Democrats”.
Referring to the abbreviation of his first name that provides the title of his latest album, he went on: “If I’m afraid to be me, I’m no longer Ye.

“I quite enjoy [it] when people are mad at me about certain things.”

West, 41, also talked about designing clothes, his family, and mental health during his first appearance on Kimmel’s late-night chat show since 2013. Their relations have not always been so cordial between the two, who had a high-profile falling out on social media prior to their 2013 meeting.

The interview followed an appearance on entertainment site TMZ in May, in which West controversially claimed the enslavement of African Americans over centuries may have been “a choice”