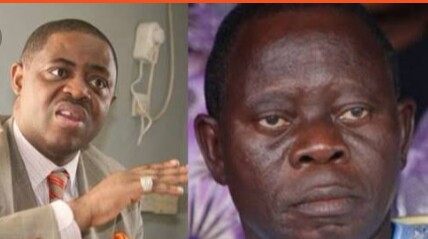 In reaction to the statement released by the ruling party, APC yesterday August 9th in which Senate President Bukola Saraki was described as the most unfortunate senate president Nigeria has ever had, Femi fani Kayode took to twitter to blast the chairman of the party, Adams Oshiomole. He wrote:

“Whilst insulting @bukolasaraki the APC had the nerve to bring in his father. My question for Gorilla Oshiomole is this: WHO is ur father?We loved and reverred Dr. Olusola Saraki.He was one of the greats! I ask again: Gorilla Osho,who is ur father and what did he achieve in life?”

The party in its statement had called Saraki a traitor who ”betrayed his father, sister (many times), his party PDP in 2014, and the APC in 2015 by conspiring with opposition PDP senators to emerge Senate President of the APC administration thereafter sabotaging the executive and defecting to the PDP in 2018”