A former Governor of Akwa -Ibom State, Godswill Akpabio, has resigned his position as the Minority Leader of the Senate. 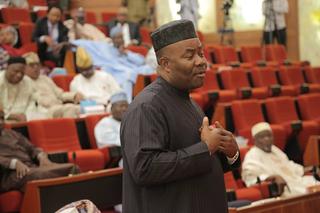 In his tweet on Tuesday, the Senator said he had already tendered his resignation letter on August 4, before making it public.

In his words:
“This letter is to formally inform you of my resignation as the Senate Minority Leader with effect from August 4, 2018.”