In the latest August issue of Forbes Africa Magazine, and in celebration of the #WomensMonth, Forbes sat down with Phuti Mahanyele and Stacey Brewer, the “Ceiling Crashers” and disruptors in business and education, and adamant about change in South Africa.

[NEW EDITION] In the latest August issue of our #ForbesAfrica magazine celebrating #WomensMonth, we sit down with @PhutiMahanyele & Stacey Brewer @stace_d_brewer, the disruptors in #business and #education adamant about change. Copies out in stores! pic.twitter.com/2SKlwxQMdo 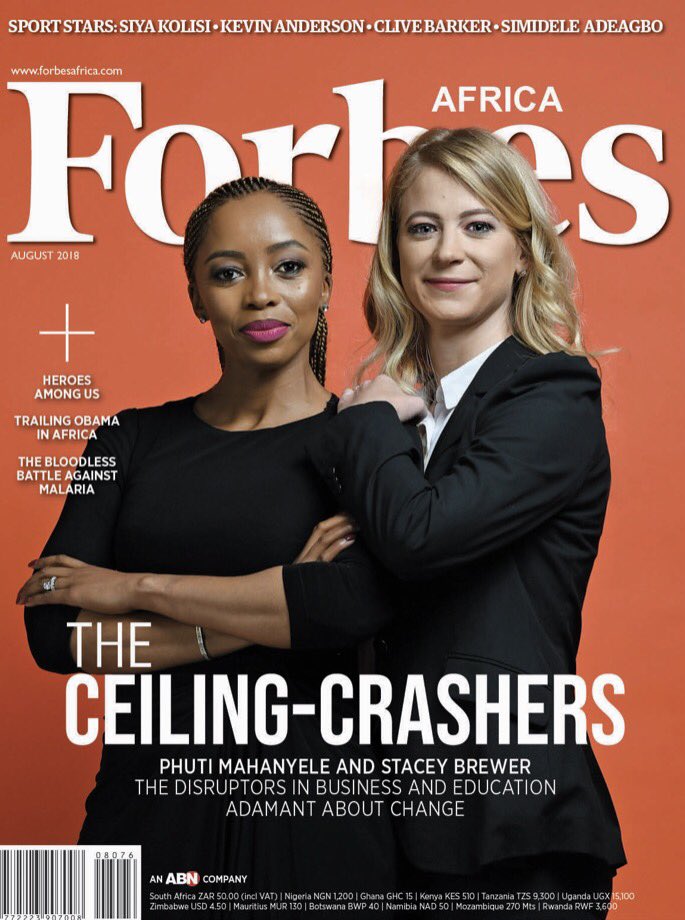 Phuti Mahanyele, who holds a BA Economics from Rutgers University, USA, and an MBA from De Montfort University, Leicester, is the Executive Chairperson of Sigma Capital, an investment holding company. She is the former CEO of Shanduka Group, an investment holding company. Prior to that, she was Vice-President at Fieldstone, an international firm, specializing in the financing of infrastructural assets.

In 2014, she was awarded the Forbes Woman “Africa Business Woman of the Year Award.” In May 2016 she became a member of the Rutgers University Hall of Distinguished Alumni.
In 2013 she was awarded a “Distinguished Achievement” by The Douglass Society, and the Africa Investors recognised Ms Mahanyele as a “Leading Africa Woman in Business of the Year” in 2012. In 2011 Rutgers University conferred on her the “Rutgers Vision of Excellence Award”. In 2009 she was awarded the “Most Influential Woman in Government and Business by Financial Services. The Wall Street Journal counted her among one of the “Top 50 women in the world to watch”. Ms Mahanyele was also selected as a Global Young Leader in 2007 by the World Economic Forum. She was awarded “Top in Project Finance, 2003” by the
Association of Black Securities & Investment Professionals (ABSIP).

Stacey Brewer, SPARK’s Co-Founder and CEO is has been a dedicated disruptor in the South African education sector.

Stacey’s accolades includes Elle Boss 2015, and The Mail and Guardian Top 200 South Africans in 2014. She is also a Mandela Washington Fellow 2015; and Barack Obama’s flagship fellowship.

See the behind the scene shoot with Phiti Mahanyele and Stacey Brewer.