In a statement on Genest’s management Facebook page, it suggests that “contrary to reports” there’s still no official cause of death.

Following Genest death, Lady Gaga in a post she has now deleted, wrote: ‘The suicide of friend Rick Genest.” She also wrote about mental health and urged fans to support one another. 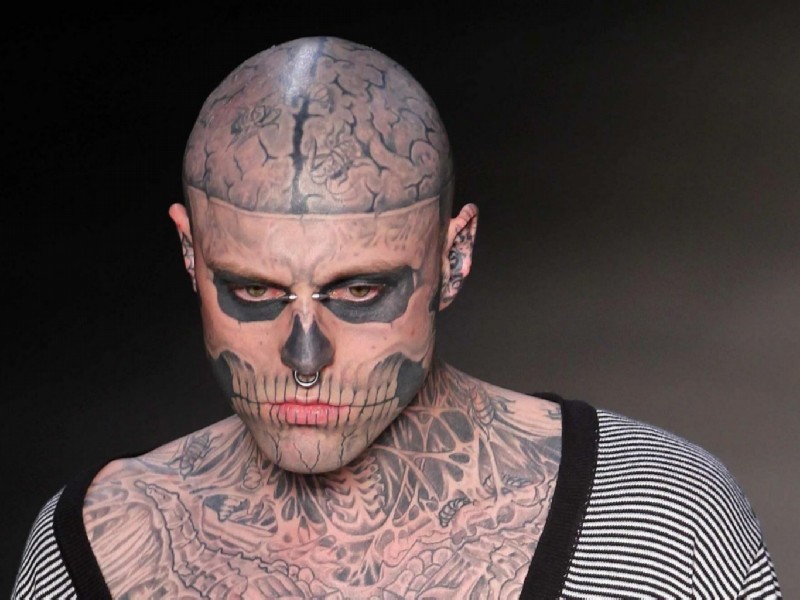 “We have to work harder to change the culture, bring mental health to the forefront and erase the stigma that we can’t talk about it,” she wrote on Twitter.

The singer in two new tweets, apologized to Rick’s family. She re-expressed her condolences and paid tribute to the model again sharing a picture of the two of them together.

Manager, Karim Leduc told TMZ Genest’s family believe his death was an accident. He apparently fell from the balcony at his home, after telling his girlfriend he was going out for a cigarette.

Rick Genest known as “Zombie Boy” died at the age of 32. He was found dead at his home in Montreal, Canada, few days to his 33rd birthday.

Genest got the name “Zombie Boy” due to tattoos of bone and organ across his body, including skull features on his face. The model wore several hats, from model to actor, and rose to fame in 2011 when he appeared in a music video for Lady Gaga’s “Born This Way.”

Genest modelled for Thierry Mugler, a French fashion designer, he appeared in Vogue Japan and was once the face of Jay-Z’s Rocawear fashion label.

Genest did a procedure at a young age because of a brain tumour and suffered from mental health issues throughout his life. He got his first tattoo at age 13 and within three years, his whole body was covered with bone and organs drawings. His unusual tattoo earned him a Guinness World Record for most insects tattooed on the body – a total of 176