“It’s one of the greatest moments of my life”, Lebron says as his ‘I Promise School’ for at-risk students opens in Akron

Three-time NBA champion, and four-time league MVP, Lebron James has opened his I Promise school in his hometown of Akron, Ohio on Monday.

The school is a joint effort between the LeBron James Family Foundation and Akron Public Schools and aims to educate at-risk youth in Akron.

While he was billed to have a press conference later in the day about his move to the LA Lakers, he tweeted the 33 year old tweeted about the school.

“Tomorrow is going to be one of the greatest moments (if not the greatest) of my life,” James said of opening the school. 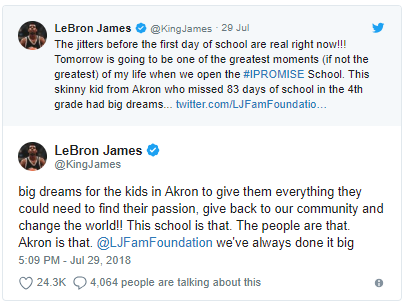 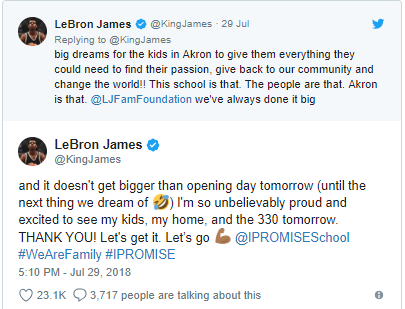 The school was created as an extension of the LeBron James Family Foundation to give kids opportunities to thrive despite difficult life situations.

“I know these kids, basically more than they know themselves. I’ve walked these same streets. I’ve rode the same bikes on the streets they ride on. I went through the same emotions — the good, the bad, the adversity. Everything these kids are going through — the drugs, the violence, the guns, everything they’re going through as kids, I know. For me to be in a position where I have the resources, the finance, the people, the structure and the city around me — why not?”

“I Promise” School is a joint venture between the LeBron James foundation and Akron Public Schools. In November 2017, the foundation approached the Akron school board on assisting in creating a school designed to help at-risk children who are facing struggles and lagging behind in their studies.

The school board oversaw the creation of the curriculum and ensured the school would meet educational standards, while LeBron served as the primary donor to help shape the outside-the-classroom goals of the school. 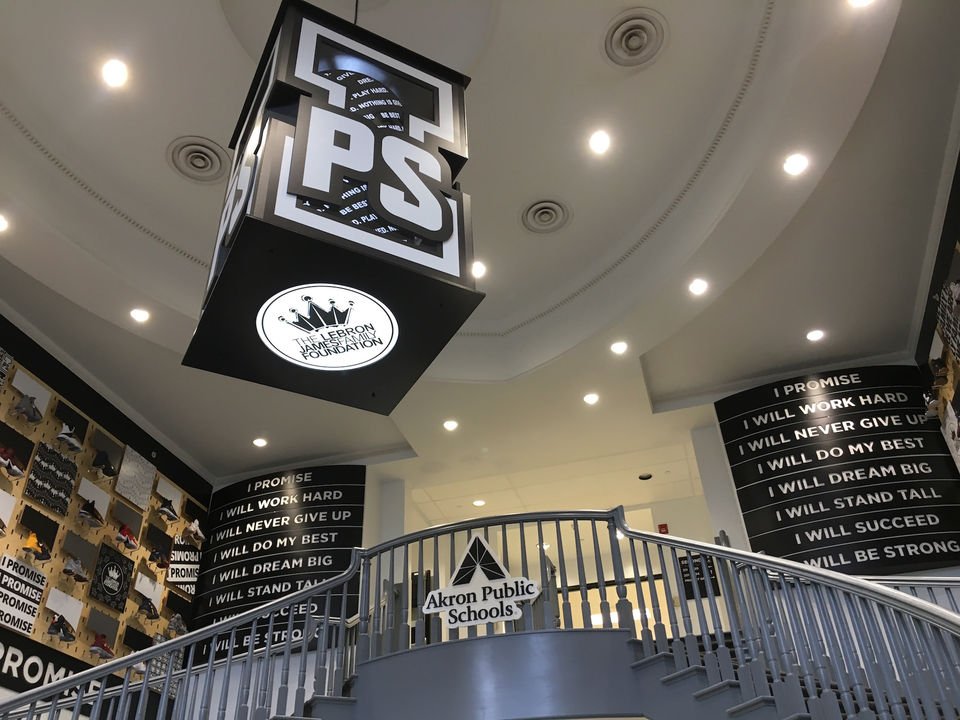 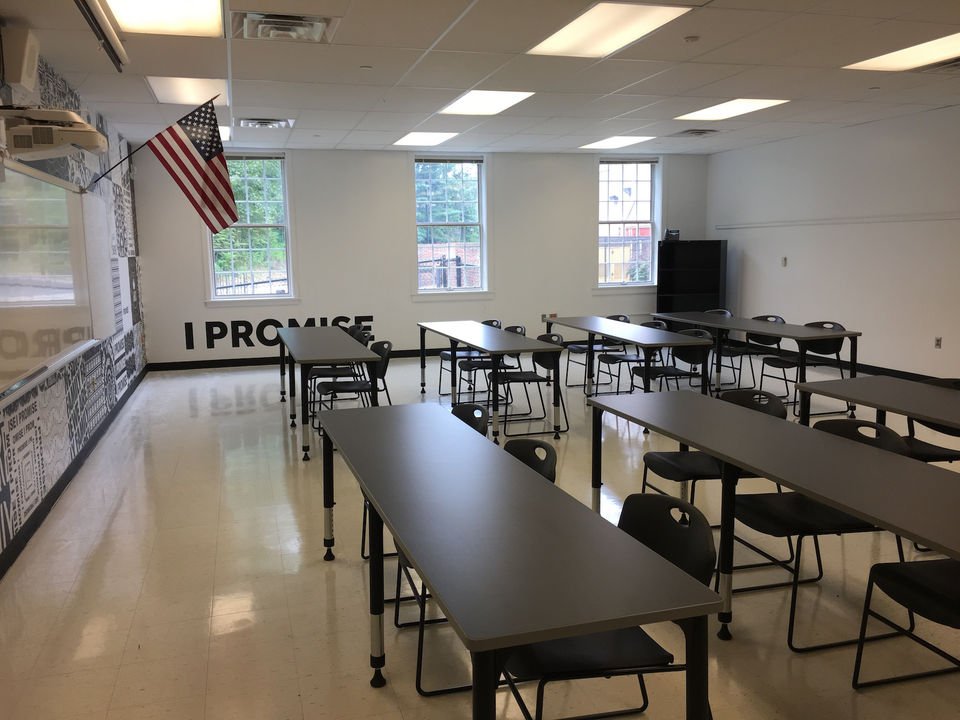 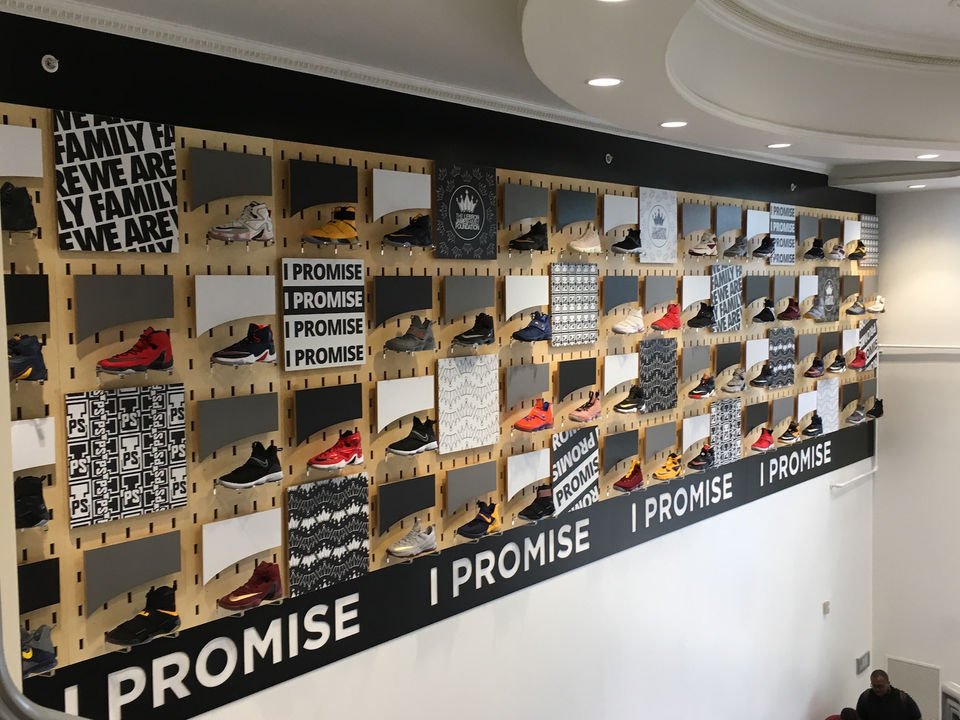 The school focuses on accelerated learning to help bring kids up to speed who might be lagging behind. It’s operations will be a “longer-than-normal school year.”

Theres also the focus on combating factors outside of the classroom that could cause children to struggle. Services are available to help students deal with stress related to parents who are struggling to make ends meet. There are also activities to prevent the kids from having too much idle time and potentially getting into trouble.

The school also provides services to families, which include job placement assistance for parents and an on-site food bank that will allow parents to pick out foods they can prepare at home.

Every student gets a bicycle on resumption. James often credits his bicycle as a huge factor in his childhood that gave him an escape from dangerous parts of his neighborhood and the freedom to explore.

The goals of the school as explained by Principal Brandi Davis:

“I think the missing link in public education is that family wraparound support.
“Because our students come to school and they’re worried about things at home. … We want to create that safe, that secure and that caring and loving environment for our families and our students so that our kids can focus on education.”

The NBA superstar on many occasions has disclosed circumstances that surrounded his growing up. “I’m just a kid from Akron” and “I’m not supposed to be here, I’m supposed to be a statistic.” He faced poverty, lack of stability and periods of homelessness when he was a child. His small family was directly impacted by drugs and violent crime, and things crashed down on him to the point that he’d stopped attending school regularly by the time he was in fourth grade.