According to a report published by the Sunday Times, Qatar 2022 World Cup bid team ran a secret campaign in 2010 to sabotage competing host bids.

The paper claims to have seen leaked documents that show the Qatari bid team employed a US PR firm and ex-CIA agents to smear its rivals – mainly the United States and Australia. The Sunday Times said the documents were leaked by a whistle-blower who worked with the 2022 bid team. However, the documents was unavailable during the FIFA inquiry.

The aim of the campaign was to create propaganda to give the impression that a World Cup would not be supported domestically.

The allegations levelled by the Sunday Times is against FIFA’s bidding rules. According to FIFA’s rules, World Cup bidders should not make “any written or oral statements of any kind, whether adverse or otherwise, about the bids or candidatures of any other member association”.

Some of the alleged aspects of the smear campaign includes:

*A respected academic was paid $9,000 to write a negative report on the huge economic cost of an American World Cup, which was then distributed to news media around the world.
Journalists, bloggers and high-profile figures were recruited in each country to hype up negative aspects of their respective bids.

*A group of American physical education teachers were recruited to ask their US Congressmen to oppose a US World Cup on the grounds that the money would be better used on high school sports.

*Intelligence reports were compiled on individuals involved in rival bids.

The Qatar bid team is alleged to have employed the service of New York office of communications company Brown Lloyd Jones, which is now BLJ Worldwide, alongside a team of former intelligence officers to run a campaign aimed at undermining one of FIFA’s key criteria in the bidding process – that each bid should have strong backing at home. 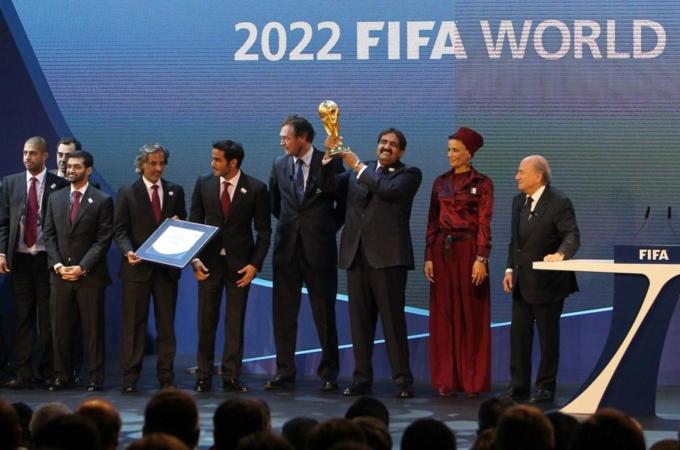 All allegations has been denied by the Qatar tournament organisers. In a statement Qatar’s Supreme Committee for Delivery and Legacy said it “rejects each and every allegation put forward by the Sunday Times”.

“We have been thoroughly investigated and have been forthcoming with all information related to our bid, including the official investigation led by US attorney Michael Garcia,” it said.

“We have strictly adhered to all FIFA’s rules and regulations for the 2018/2022 World Cup bidding process.”

In a statement by FIFA, “a thorough investigation was conducted by Michael Garcia and his conclusions are available in the report.”

Communication company, BLJ Worldwide did not respond to a request for comment from The Sunday Times.

The Qatar bid team has been previously accused of corruption, but was cleared following a two-year FIFA inquiry.

Qatar beat rivals – US, Australia, South Korea and Japan – to win rights to host 2022 World Cup in December 2010 while Russia was awarded the 2018 World Cup hosting rights at the same time, beating three other bids including England.