The resignation of a prominent US catholic priest has been accepted by Pope Francis. The priest is being accused of sexually assaulting a teenager nearly 50 years back.

Mr McCarrick is alleged to have assaulted a teenager in New York back in the early 1979s, while working as a priest there. The claims were made public in June by the current Archbishop of New York, Cardinal Timothy Dolan who said an independent forensic agency had investigated the allegations.

A review board, including legal experts, psychologists, parents and a priest, then found the allegations “credible and substantiated”.

However, Mr McCarrick in a statement said that he has “no recollection of this reported abuse” and believe he’s innocent.

Other accusations have sprung up following this one. Several more men have said Mr McCarrick forced them to sleep with him at a beach house in New Jersey, while they studied for the priesthood as adult seminarians. One man has come forward saying he was assaulted while still a minor.

Mr McCarrick has not commented on the more recent allegations.

Last month Church officials said the allegations were credible but Mr McCarrick has said he has “no recollection” of the alleged abuse. Further allegations have since emerged after this. 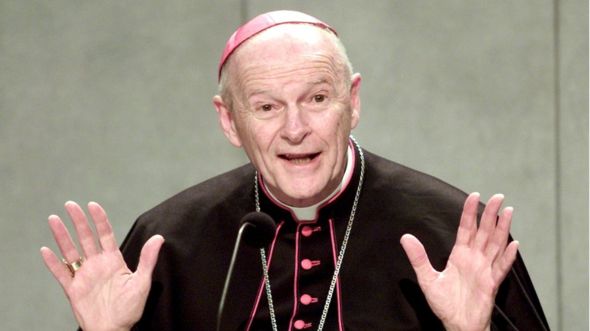 In an issued statement from the Vatican, McCarrick ‘s resignation letter has been accepted from the cardinalate by Pope Francis and has ordered his suspension from the exercise of any public ministry.

The Vatican also disclosed that the former Archbishop of Washington, must carry out “penance and prayer” pending trial – he would be placed in seclusion “for a life of prayer and penance until the accusations made against him are examined in a regular canonical trial”.

According to the New York Times, Mr McCarrick’s resignation from the cardinalate is the first since 1927, when Father Louis Billot resigned because of political tensions with the Holy See.
Kurt Martens, a Catholic University legal expert explains that It is also the first time that an order to carry out penance and prayer has been made before a Church trial takes place.

The Pope appears to “understand the gravity of the situation and further harm to the Catholic Church’s status”, AP quoted Terence McKiernan from BishopsAccountability.org as saying.

The Vatican’s quick action stands in contrast to previous instances where cardinals have faced allegations that they carried out or covered up abuse. In 2013 Scottish Cardinal Keith Patrick O’Brien resigned as Archbishop of St Andrews and Edinburgh after being accused of sexual misconduct. However he remained in the college of cardinals until he died earlier this year. Also, Cardinal Bernard Law stepped down as archbishop of Boston in 2002 after reports he had moved paedophile priests between parishes rather than addressing victims’ claims. But he was then allowed to take a job at the Vatican, where he worked until 2011. He died in Rome last year.

Theodore McCarrick became a priest back in 1958 and later worked in New York and New Jersey before becoming Archbishop of Washington between 2001 and 2006. Even after officially retiring, McCarrick has continued to attend events abroad, including those focusing on human rights issues.

Local reports holds that McCarrick has been heavily involved in the response to allegations of abuse by Catholic priests in the US.

He’s known in Washington for his focus on the plight of Christians and other religious minorities in the Middle East and have a reputation as someone who could work with powerful figures on all sides.

His resignation means the titles of Cardinal and “your eminence” are removed, America Magazine editor and Jesuit priest James Martin said on Twitter.