Popular Nollywood actress and philanthropist, Tonto Dikeh, aalongside the National Agency for the Prohibition of Trafficking in Persons, NAPTIP, yesterday took the campaign against human trafficking to students of the University of Abuja. 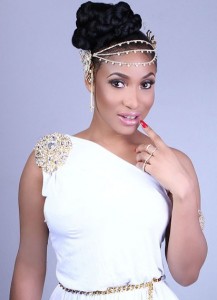 The campaign which was well-attended by several other celebrities aimed at increasing the conversation around the menace especially among students of the institution. Speaking to newsmen on the sidelines of the campaign, the Director-General of NAPTIP, Julie Donli-Okah, said the event created an opportunity for the agency to engage directly with the undergraduates on the issue of trafficking in persons. According to her, a lot of youths have fallen victims in the past to human traffickers who exploited their ignorance on the issue.

Donli-Okah, represented by the Director Public Education, Mr Arinze Orakwue, said The Tonto Dikeh Foundation has ushered a very important week for the commemoration of the 2018 World Day Against Trafficking in Persons.

In her remarks, Tonto Dikeh explained that she chose, as NAPTIP’s national ambassador, to focus her energy on undergraduates because it has been observed that most victims were unemployed fresh graduates who were enticed with prospects of securing high-paying jobs overseas.

She said: “We chose to focus on the undergraduates because human traffickers exploit the unemployment situation in the country to lure youths who are fresh out of school with job offers overseas. “So, we have to educate them even before they leave school and also tell them about the pains, the dangers and the negative effects of human trafficking on our society and country at large. Some people are ignorant and that’s why they were trafficked in the first place. “We are also working closely with the student unions to set-up a NAPTIP club on campus to ensure that the campaign is sustained beyond this event. “We want to drive the message against human trafficking to the streets, homes, communities as well as nooks and cranny of Nigeria.” Other celebrities who accompanied the popular actress to the campus campaign include: Toyin Abraham, Bobrisky, Styl Plus, Halima Abubakar among others.