Following their rescue from a flooded cave, most members of the Thai youth football team are having their heads shaved as they are ordained as novices in a Buddhist ceremony alongside their coach who is also receiving monk’s orders.

In accordance with Thailand’s tradition for males who experience adversity, the boys will spend nine days living in a monastery. This step is intended to be a “spiritual cleansing” for the group. 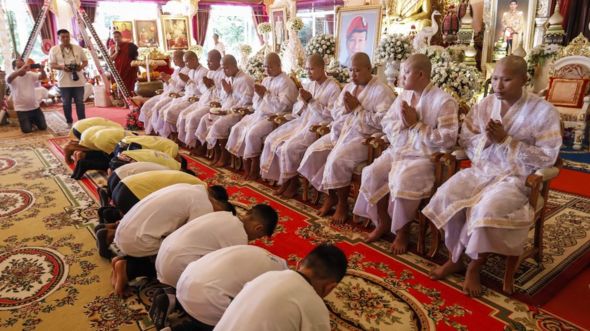 According to Thai officials, the boys start the process by having their heads shaved, before attending a robe ceremony on Wednesday. They will stay in different monasteries until 4 August meditating, praying and cleaning their temple. The length of time they will spend doing this – nine days – is a nod to a Thai lucky number.

However, one of the boys, Adul Sam-on will not be joining the rest of the boys for the ceremony as he is a Christian. Their coach Ekkapol “Ake” Chantawong, 25, will join them for the same period of time but as a fully fledged monk rather than a novice.

The coach had spent time in a monastery as a novice before this. Although he has attracted some criticism for taking the boys into the cave, he is also credited with helping them through the ordeal by reportedly teaching them meditation techniques to help them stay calm and use as little air as possible.

The “Wild Boars” football team were trapped for more than two weeks in a cave before a dramatic rescue. The boys were all released from hospital last week and are said to be in good health after their ordeal in the snaking caverns of the Tham Luang caves of northern Thailand.

Their story was followed by millions worldwide since 23 June, when they walked into the Tham Luang cave after football practice – only to be trapped by sudden monsoon floods.

The 12 boys and their football coach spent nine days in the cave with little food or light before British divers first reached them on 2 July. But with more rain expected, a risky rescue was attempted.

One ex-Thai navy seal diver, Saman Gunan, died during the rescue effort while installing oxygen tanks in the cave.

The cave system has now been sealed off, but officials have said it could be reopened in future as a tourist attraction