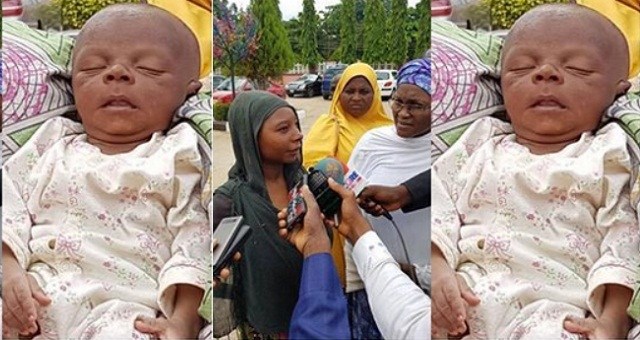 A 3-month-old baby boy whose mother, Aisha Yau, attempted to kill, has been rescued by the Kaduna state government.

According to TheNation, the Kaduna State Commissioner for Women Affairs and Social Development, Hafsat Muhammed, rescued the baby from his mother, Aisha.

Aisha, who stays under the popular Kawo bridge, was said to have purposely kept the baby under a trailer’s wheel with the expectation that when the trailer moves, it will crush him.

To ensure that that was done, she stood aloof and prevented people from carrying the baby while persuading the driver to start the engine.

But fortunately for the infant, a passerby quickly drew the attention of the commissioner to the scene. Aisha could not explain how she got to Kaduna, she only hinted that it was the crisis in her state, Taraba, that scattered her family members without a trace of any of them, more than a year ago.

In her words:
“One of my suitors in Kasuwan Baici here in Kaduna, got me pregnant but he denied the pregnancy and refused to take care of me and the baby. So, I want to kill the baby to save myself from shame”, she said.

Speaking with newsmen, the commissioner said she has directed social department in her ministry to take Aisha to the hospital for medical examination and treatment before repatriating her and her child to Taraba State.