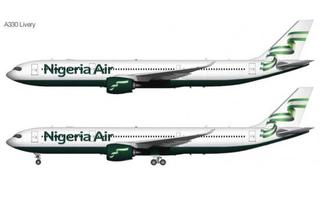 The Federal Government has on Wednesday unveiled the branding of the new national carrier, Nigeria Air, and the FG also stated that the airline would be inaugurated at the end of this year.

According to a statement issued by the Ministry of Aviation in Abuja, the Minister of State for Aviation, Senator Hadi Sirika, unveiled the carrier at a press conference during the Farnborough Air Show in London.

Sirika was quoted as saying,

“I am very pleased to tell you that we are finally on track to launching a new national flag carrier for our country, Nigeria Air. We are all fully committed to fulfilling the campaign promise made by our President, Muhammadu Buhari, in 2015. We are aiming to launch Nigeria Air by the end of this year.

“We obtained the Certificate of Compliance from the Nigerian Infrastructure Concession Regulatory Commission two weeks ago and can now go into the investor search. I am confident that we will have a well-run national flag carrier that is a global player, compliant with international safety standards and one which has the customer at its heart.

“We hope to establish an airline that communicates the essence of our beautiful country; an airline we can all be proud of.”

The ministry said the branding and naming of the new national carrier came after a social media campaign that was undertaken by the Ministry of Transportation (Aviation).

Nigerian youths were said to have been carried along in coming up with a name for the new flag carrier, the ministry’s Facebook page and website was said to have engaged over 400,000 people.

The ministry said extensive market research was carried out, which involved focus groups across the country, and over 100 interviews with aviation stakeholders and professionals, politicians as well as business owners.

It also stated that it was currently running an aviation road map that includes airport concession, aerotropolis, an aircraft Maintenance, Repair and Overhaul centre, agro allied terminals, the national carrier and an aircraft leasing company.

Sirika said the Federal Government had learnt a lot of lessons from the experience of the defunct Nigeria Airways, and was now determined not to repeat the mistakes that led to its demise.

Meanwhile, Sirika has stated that the Federal Government has selected 81 routes for the commencement of operation of Nigeria Air

He added that the airline would operate on a Public-Private Partnership model, while investors and strategic partners would decide who would run it.

An aviation expert, Group Capt. John Ojikutu (retd), however, stated that the Federal Government’s route plan was not properly thought out.

He said the routes were already saturated with the new airline’s competitors, adding that this might stifle its growth.