DINO MELAYE DESCRIBES BURNING OF HIS SCHOOL PROJECT AS BARBARIC

Senator Dino Melaye has condemned the burning down of a block of four classrooms he donated to Government Girls Secondary School, Sarki Noma, Lokoja by unknown arsonists.

Melaye, who spoke with journalists shortly after inspecting the burnt section of the classroom block at the school premises, described the incident as barbaric and uncivilized. 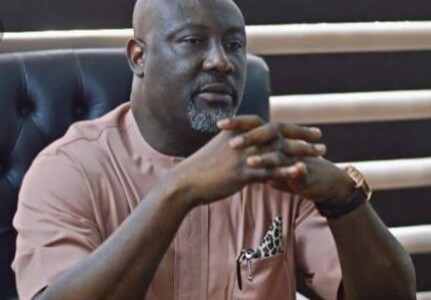 He also condemned the vandalisation of a block of four classrooms he built at UBE Junior Secondary School at Lokongoma area in Lokoja by hoodlums, urging the police to bring the perpetrators to book.

Melaye, said that the action of the hoodlums was an embarrassment to the state that was well respected for its exploits in education in Northern Nigeria.

Melaye however, promised to rebuild and repair the burnt and damaged blocks of classrooms, saying that no amount of intimidation and harassment would divert his attention from providing qualitative representation to the people. He also said that the incident would not stop his planned one-week thank you tour of the senatorial district and inauguration of some of the 143 projects he had executed in the past three years at a cost of N7 billion.

The senator later inaugurated the two blocks of four classrooms to be built at LGEA Primary School, Tawari, and LGEA Primary School, Manyare, the 10- kilometre Manyare -Gegu Beki road and the 15-kilometre Orehi – Irovomi road, all in Kogi local government. He charged the people of the communities where the projects were located to protect them from vandals and make the best use of them.