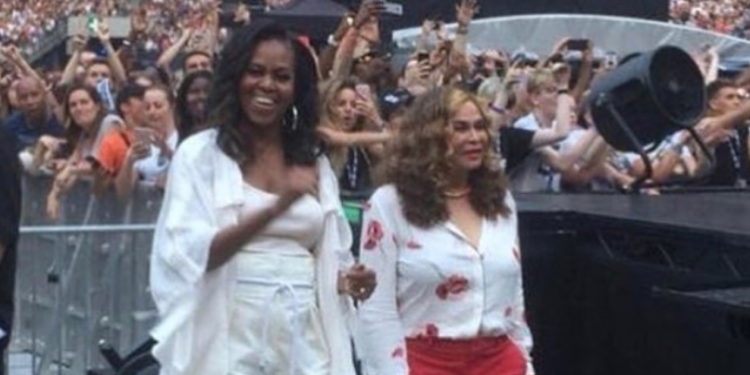 The former First Lady of the United States, Michelle Obama was seen over the weekend alongside Tina Knowles Lawson Beyonce’s mum at the couple’s On the Run tour in Paris.

Photos and videos of Obama and Lawson were shared by Social media users. An Instagram user @allybees posted a photo of the power duo front row at the Stade de France as Bey and Jay performed.

One of the video posted on Twitter shows Jay-Z performing “On to the Next One” as Obama and Lawson dance next to the stage. One of the Obama’s daughters, Sasha Obama was also spotted in attendance at the show over the weekend.

Before power couple took the stage on Sunday, attendees filled the stadium to watch the 2018 World Cup Final between France and Croatia.

Lawson shared video footage from inside the stadium as the crowd watched France defeat Croatia. “World Cup mania before the Concert in Paris . The tour screened it and it was packed 4 hrs before show Congrats France,” she captioned the post.

It’s been just over a month since Beyoncé and Jay-Z kicked off their On the Run II tour in Cardiff. Since then, the couple has been performing all over Europe together, but they did find some time to enjoy a romantic trip to Lake Como, Italy between shows earlier this month.

Bey and Jay will be on stage again on Tuesday at their next tour stop in Nice, France.

Anthony Bourdain Talked About his relationship with ...