OSGMCM- WHY WE LOVE AHMED MUSA

Our man crush this Monday is Nigerian footballer and entrepreneur, Ahmed Musa.

The professional footballer, plays as a forward and left winger for the English team Leicester City and the Nigeria national team. 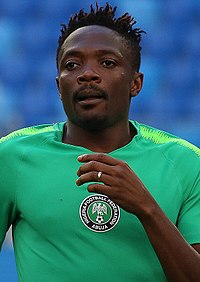 Musa began his career in the GBS Football Academy. In September 2007, a local publication in Jos, Nigeria featured Ahmed Musa on its ‘Undiscovered Talent’ column. The following year, he was loaned to JUTH F.C, where he played 18 games, scoring four goals in his first two professional seasons for the Healers. He was subsequently loaned to Kano Pillars F.C.,in the 2009–10 season where he set the league record scoring multiple crucial goals as Pillars finished second.

He held the record for the highest goals ever scored in one season in the history of the Nigeria Premier League until November 2011. Musa is also known for his philanthropic nature, giving out food to the society. He has just been nominated alongside C.Ronaldo and other great footballers for the goal of the tournament award in the just concluded FIFA 2018 world cup.

We celebrate a talented and unique football player as our man crush Monday.