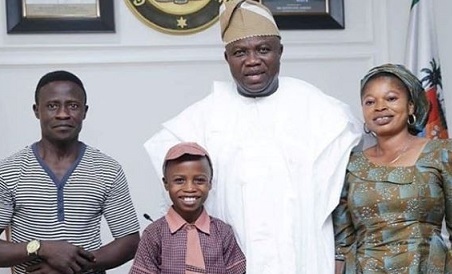 The young artist was accompanied by his parents, teachers and instructor. The Governor promised to help him become a great artist in life. He also pledged to support Warris instructor who owns Ayowole Academy of Arts.

The boy, who dreams of becoming like Caprese Michelangelo — an Italian sculptor, painter, architect and poet, impressed the French President with his art.

The president apparently, liked Olamilekan’s drawing as he shared the video of the presentation on his Instagram page, with the caption:

“I am very touched. Congratulations to this young boy.”