Bovi wishes RMD happy birthday, asks him for his money

The comedian took to Instagram to wish the veteran Actor well, and posted a picture of the two with the hilarious caption of how the actor owes him money:

,“You can take the man out of warri; but you can’t take warri out of the man. The popular gist amongst comedians is that “RMD no Dey drop” “Rmd use plier hol him money” , “Rmd na akagum”? Personally I get scared to participate because in all honesty, he’s always given me when I ask (on a very serious code sha). So we are back stage at this massive event. Rmd is special guest seated in the front row. “

His entrance was heralded by a rapturous applause. The next comedian going on stage is De don and De don says “na RMD stinginess I wan talk of today. I go finish am” I step in and plead with De don to tone it down but he’s having none of it. So we reach a middle ground. I tell De don that to make the joke sweet, after yabbing Rmd, he should say “to prove say Rmd stingy, bros give me five thousand naira.” . Rmd will then proceed to give him the money to prove De don wrong.. We sneak to Rmd in the audience and let him in on the plan. We actually mopped up the 5k and gave it to him.

All he had to do was hand it back during the act. Phew!!! I guess you know how this ends. De don gets on stage and thrills the audience on the legendary tight fist of Rmd. And to sign out on a high, he goes to Rmd as planned and dares him to prove he’s not stingy by giving him 5k only (our combined 5k to make d joke sweet). The Hall goes quiet. In slow motion, Rmd takes the microphone and to our collective horror, he announces “I gree, I stingy die. I no go drop”. ??????.And that’s how the 5k that we contributed went into thin air till this very day????. Bros you know they say you don’t turn down requests on your birthday. So Happy birthday bros @mofedamijo but I take God beg you, free our 5k. 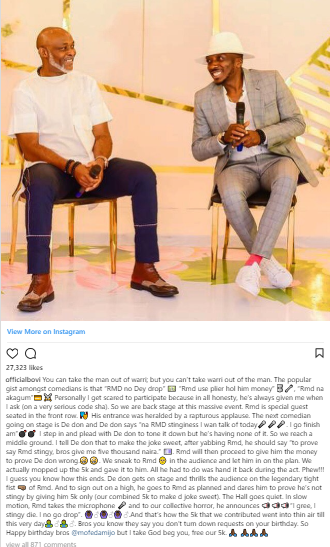 Femi Kuti reveals what he discusssed with ...