“The Queen Reclaims Her Throne” is all that reads on the new July cover of Elle magazine, featuring a delightfully polished Nicki Minaj wearing a multi-colored beaded top and matching headwrap. 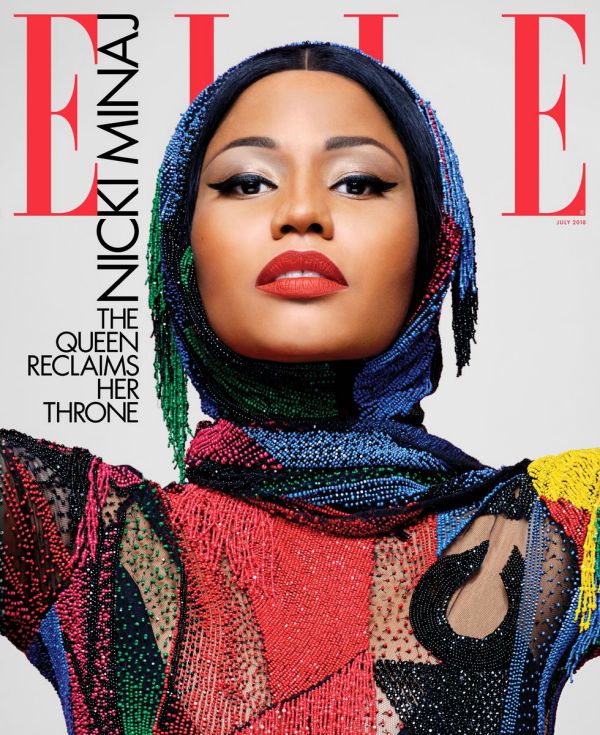 Photographed by world-renowned fashion designer Karl Lagerfeld, Nicki revealed in a behind-the-scenes story to Elle that she was excited when she found out she would be photographed by the head creative director of Chanel.
In her words:
“I wanted to cry,” Nicki shared about her cover shoot. “All I do is wear Chanel.”

Besides styling in the best designer fashions and charting with her “Chun-Li” hit, Nicki stuns in Alexandre Vauthier jersey dress ($7,182) and Stuart Weitzman suede pumps ($385).

In the exclusive interview with Elle, the 35-year-old rapper spoke candidly about how she’s experiencing “more growth in the last six months” than in the last eight years.

“It’s the first time in my life I’ve ever been single.”

Revealing this is the very first relationship hiatus she’s ever been on since being 15 years old, Nicki admits she had to learn to be alone.
In her words:
“As soon as I realized that I could actually live and breathe, and eat and sleep, and walk and talk without having a boyfriend, something clicked in me.”

“Becoming single was one of the things that made me feel strong and powerful,” she continued on the topic. “The fact that I am a young woman who doesn’t need a man for money. I don’t need a man for a job. I’ve never had to fck for beats. I’ve never had to fck for a record deal. I don’t have those pressures. I get up when I want, shop when I want.”

Speaking of dealing with the opposite sex, Nicki also revealed one of the messages of her new album is that it’s “OK to keep your legs closed.”

She then went on to share her thoughts about the moment she realized how many girls especially Instagram girls were modern-day prostitutes.

IT WOULD HAVE BEEN PRINCESS DIANA’S 57TH ...