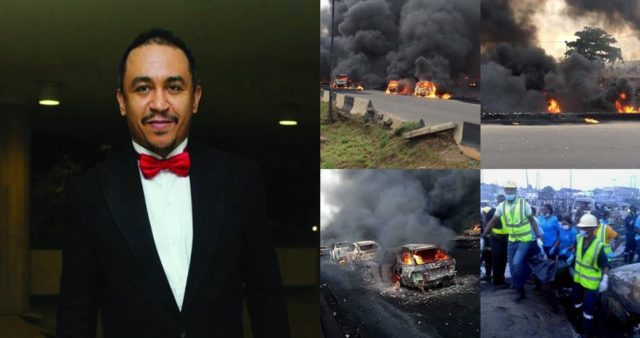 A video and audio of a clergyman predicting the Otedola bridge tragedy incident, has been making rounds on social media and some Christians have been praising the man of God.

Daddy Freeze however took to his IG page to react to the video.

According to Daddy Freeze, the predictions by Prophet Udensi Godlove is bereft of spirituality and with no recourse to God.

Here is what he wrote;

”I listened to that bescumbered broadcast bereft of spirituality and with no recourse to God.

Yet I know that with the problems Nigeria is facing, combined with our gullibility for ‘men of god’ whoever made those predictions is now fast on his way to becoming a ‘god’ himself.

His exact words were “These dates I have mentioned do not travel out of lagos using the following transport….” and he proceeded to mention names of transport companies, claiming they were marked for blood.?

Before you guys start jumping and lapping this shit up, let me ask you; does this look like a prediction for Saturday’s Plateau massacre or yesterday’s tanker explosion? ABSOLUTELY NOT!

He clearly mentioned transport companies going out of Lagos, listen to the audio clearly without sentiment or emotion and you will see what I’m sayin.

Yesterday’s disaster involved a tanker and vehicles within Lagos going about their normal activities on a Thursday, NOT LUXURIOUS BUSES GOING OUT OF LAGOS that were ‘marked for blood’?

Nigeria has become so hungry for prophets that we jump at anything with spiritual semblance without analyzing what they are saying critically.

Before you leap and start believing anything, drop your emotions, prejudices, sentiments and inbred gullibility on the floor and listen again, this time carefully!”