ANOTHER ACCIDENT ON OTEDOLA BRIDGE, TWO BUSES CRASH INTO EACH OTHER IN LAGOS, MANY INJURED 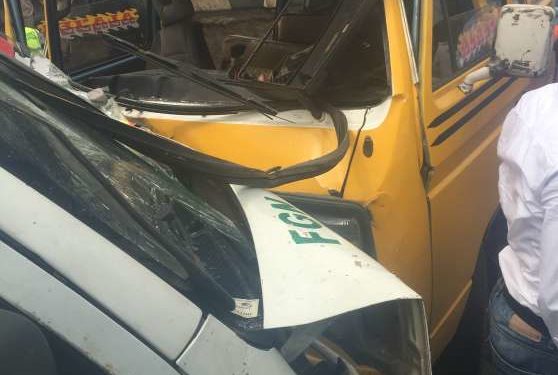 Otedola Bridge has witnessed a fresh accident as two buses crash on the bridge some hours ago.

About 8 passengers have been reported to be injured from the crash. This is coming just hours after the bridge witnessed the death of at least nine people when a fuel tanker exploded on Thursday. 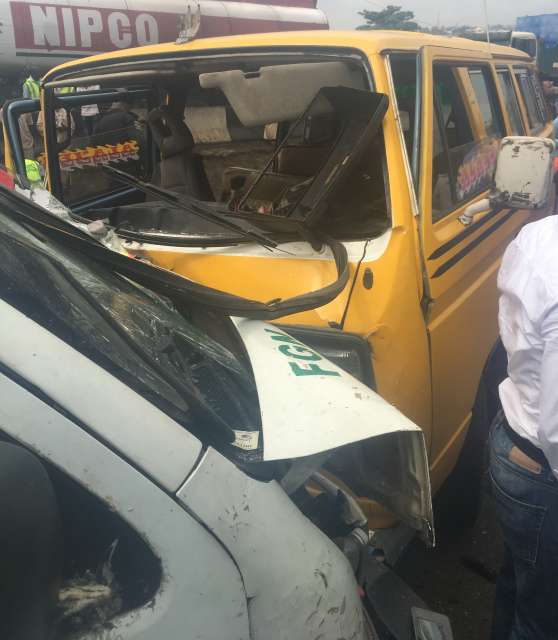 According to an eyewitness, a commercial bus, popularly called danfo, illegally took the one way route, on the other side of the road from the explosion accident, and crashed into a white Toyota Hiace bus with Lagos number plate AAA-926XU.

Many passengers were injured with one person struggling for breath before he was rushed to a hospital by officials of Lagos State Emergency Management Agency (LASEMA) who were already on the scene because of the previous day’s accident.
Reports from the scene of the accident indicated that the driver of the danfo bus was speeding because he was running from officials of the Lagos State Traffic Management Authority (LASTMA) after he violated a traffic law.

According to the driver of the white bus, who identified himself as Ayinde, his bus was travelling interstate from Ondo State before the accident. He reported that the LASTMA officials that were chasing after the driver ran away immediately after the crash happened.

When police officers got to the scene, the driver of the danfo bus was arrested with 200mg of tramadol found inside his bus.

All the people injured from the crash were passengers of the danfo bus as all 15 passengers in the white bus escaped unhurt.

LASEMA has also confirmed that at least nine people were killed in the petrol tanker explosion which occurred earlier on on Thursday, June 28, 2018. 4 other people suffered from varying degrees of burns
According to LASEMA, the accident occurred when a Mack tanker truck loaded with 33,000 litres of Premium Motor Spirit (PMS) fell and spilled its content on the road resulting into a fire outbreak.

The Lagos State Traffic Management Authority (LASTMA) disclosed that the accident was due to a brake failure.

Ambode expresses pain over accident
After paying a visit to the scene of the tragic accident as emergency responders cleaned up the scene late on Thursday, state governor, Akinwunmi Ambode, took to his Facebook account to express his sadness over the tragic loss of lives.

He wrote, “Very sad day. The loss of lives in an accident like today is very painful. My prayers are with everyone affected by this tragedy.”