The news has been reported of a Chicago-based Nigerian pharmacist, Olasunkanmi Esho, who allegedly killed his Cameroonian wife, Bourk Esho, and their eight-year-old daughter, Olivia. 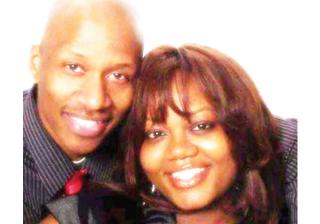 42 yr old Olasunkanmi, who lived in Ilinois, Chicago, in the United States of America, was alleged to have also shot himself after the incident.

It is not clear if the couple had any disagreement prior to the incident.

The Chicago Tribune however reported that the Darien Police Department had started investigations into the tragedy which happened in an apartment building on 75th Street, Farmingdale Drive.

The report said the police responded to a call about shots fired, adding that the police found the three family members dead.

A friend of Bourk, Lawrence Willis, said she was a student of his at the Chicago State University and a former employee of St. Bernard Hospital and the University of Illinois, Chicago.

Willis explained that the 33-year-old worked in the health information management department at the University of Illinois.

A Facebook user, Djeric Lemessi, who claimed to be a family friend of the couple, said they were survived by two children who were not around at the time.

“This happened yesterday (Sunday) morning in Chicago. The eight-year-old died in the arms of the 13-year-old, who heard gunshots and went to call his mom that he had heard gunshots outside, not knowing that their dad had shot their mom.

“He saw his sister in a pool of blood, carried her to seek help only for her to die in his arms; horrible story. The wife’s parents are from Guzang – Mr and Mrs Mudoh. Good friends of mine,” he wrote.

A neighbour of the couple, Suzanne McCray, said her child and Olivia were classmates.

“This is so sad; I saw at least one of them every evening picking up their daughter from after-school the same time as I.

“You just never know what couples are going through. Just saw the mom on Friday and she smiled and we chatted a bit about how she survived 1st grade; praying for the family,” she said.