Talented Nigerian musician, Falz has just been featured on CNN world for mirroring the situation of Nigeria in his ‘This is Nigeria’ video.

The video which has gone viral, has attracted a lot of celebrities and the society at large. Everyone keeps giving kudos to Falz for discussing and escalating the issues in the society and Nigeria’s major problems in an entertaining way. 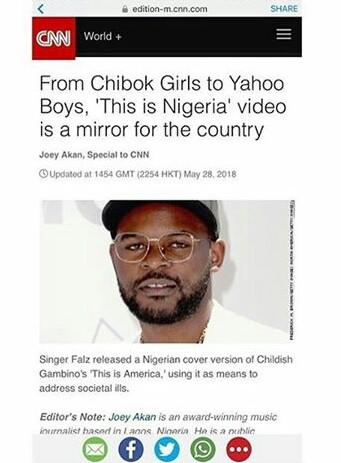 The song is a remake or cover version of the American musician/filmmaker, Childish Gambino ‘s hit, ‘This is America’.

The video, which was released late on Friday, was met with mixed reactions, largely due to the sensitive issues it addresses.

Reacting to the video, which has since gone viral, Diddy posted a short clip on his Instagram page.
He wrote: “#Nigeria LETS GO”