Posting a beautiful first picture of him, Chrissy wrote:
“Hello, world! This is Miles Theodore Stephens – We are drowning in his little peeps and nuzzles,” the model captioned a pic of the newborn sleeping on her. “Our household feels overwhelmed with love. Thank you for all your well wishes!” 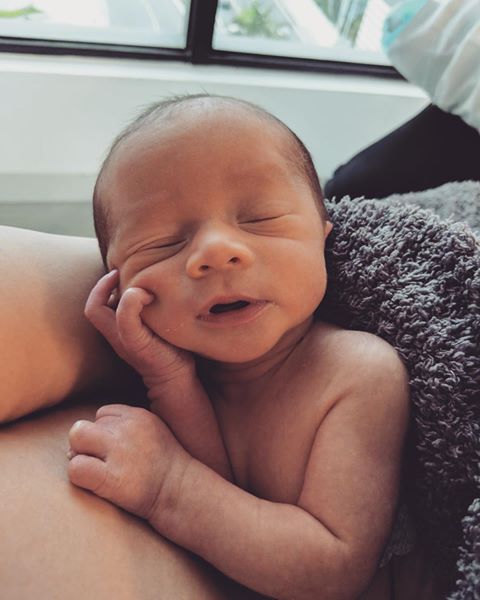 Teigen, 32, gave birth to her second child with Legend, 39, on May 16, just six days after she tweeted that she was “over” her pregnancy and “five days over due.”

The Cravings author opened up to Us Weekly in March about the possibilities of having a third child.

“I think I do want to have another baby after this and then get hot,” she told Us at the time. “I have a husband who truly loves the whole experience.”
“He holds my belly at night, sings to it, wants to be there for me,” Teigen continued. “I’m really lucky because some men start to look at you like a tool, I’ve heard, so I’ve been scared and don’t let that happen to me! But it hasn’t and it’s really good.”