CARDI B OPENS UP ON FEUD WITH NICKI MINAJ

Popular award winning rapper, Cardi B has settled her long time beef with Nicki Minaj. On Monday night, a photo of Nicki Minaj and Cardi B engaging peacefully in a conversation at the Met Gala surfaced. In one photo, the two can be seen speaking to each other in conversation, while the the second flick captures them both in a goofy selfie. 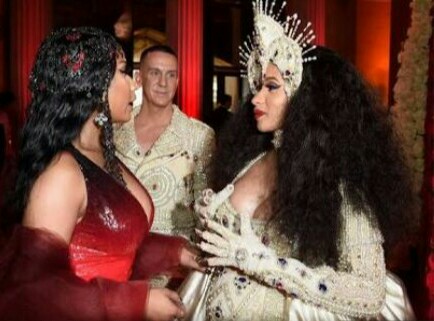 In a new interview with Howard Stern’s Sirius XM radio show Wednesday morning (May 9), Cardi explained what took place Monday night when she and Nicki linked up. In her words:

“I never was feuding with anybody; there was a misunderstanding,” Cardi said when asked if she and Minaj were beefing. “I think she felt a certain type of way about something. I definitely felt a certain type of way about something,” she lamented. “I didn’t wanna ever talk about it in public because I felt like we gonna see each other again and we will talk about it, and it’s always like little issues. The thing is, it’s always little issues, but you know, fans are always gonna make it a big thing.” Then, she pointed out how important it was for them both to meet in person and iron out the wrinkles in their relationship.
“I spoke to her about it,” she added. “I spoke to her at the Met Gala about it, and it’s just like, see? It’s just something that had to be talked about because it was an issue.” When Stern grilled her about what the problem was, Cardi refused to spill any details regarding their rift. “I’m not gonna talk about it, but I really feel a certain type of way,” she said. “My feelings was really hurt, and I was just on some, ‘You know what? This is why I just keep to myself. This is why I cannot fuck with nobody.'”

Pregnant Cardi B also criticized the media, who relished in her back-and-forth ordeal with Minaj.
She said : “The media, they just so thirsty to put women in hip-hop — not just women in hip-hop, color women — against each other,” she said. “I don’t understand why they do that and why they want to do that. Like, I’ve seen so many Hispanic artists — females — work with each other, and it benefits them so well.”