The vice president of Nigeria, Professor Yemi Osinbajo has just reminded everyone what his passion really is. Some hours ago, he shared in Instagram, pictures of himself teaching primary school pupils of a school in Ondo state. Here is what he wrote as caption: “Teaching has always been one of my favourite things to do. It was even more spectacular teaching the pupils this morning at the Alagbaka estate primary school in Akure, Ondo state”
Professor Yemi Osinbajo who was once a lecturer, was educated at Corona primary School, in Lagos. Between 1969–1975, he attended Igbobi College Yaba, Lagos, Nigeria, here he was the winner of the State merit award. 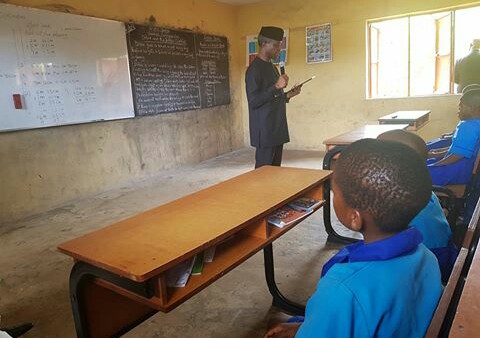 Thereafter, he studied for his undergraduate degree at the University of Lagos where he obtained a Second Class Upper Degree in Law. Here, he also won the Graham-Douglas Prize for Commercial Law. In 1980, he attended the London School of Economics & Political Science, where he obtained a Master of Laws degree.