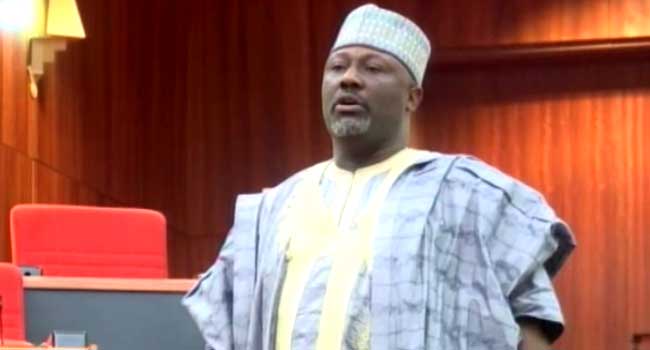 The Senator representing Kogi West Senatorial District in the National Assembly, Dino Melaye, has been denied bail in the case of an alleged conspiracy and aiding of jailbreak.

The Senator who arrived in Lokoja, Kogi State on Thursday morning appeared before the Magistrate court on a stretcher amidst heavy security.

As the case commenced, the prosecution council Alex Isihon, stated that the court did not have the jurisdiction to entertain the case.

But counsel to Senator Melaye, Mike Ozekhome in his submission argued that the court had the power by virtue of the Constitution to try the case.

Furthermore, he quoted Section 97 of the Penal Code which stated that the offence of conspiracy is bailable according to the Kogi State Administration of Criminal Justice.

However, after a short recess, Chief Magistrate Suleiman Abdulahi denied the bail application and ruled that Melaye would remain in custody for the next 39 days.

Melaye is being arraigned for an alleged criminal conspiracy, as two suspects had earlier this year implicated the senator as their financier and supplier of guns to commit various crimes in the state.

He is also being tried for causing damage to government property, attempted suicide and escape from lawful custody.

The arraignment today follows his discharge from the National Hospital after he was confirmed fit for trial.