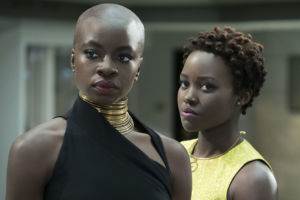 Popular black panther stars, Lupita Nyongo and Danai Gurira (Okoye) have been spotted in Lagos.
While the purpose of the visit is not yet known, it may be related to the two actors starring in a tv miniseries adaptation of Chimamanda Adichie’s Americanah.

Four years ago, we heard the news that Lupita Nyong’o has acquired the rights to adapt Chimamanda Ngozi Adichie’s Americanah. But save for reports of David Oyelowo joining the Nyong’o-led cast, news surrounding the adaptation has been few and far between.

This year, it was reported that the acclaimed novel would be made into a miniseries, not a movie as was initially announced. Now, the project officially has a writer: the talented actress and playwright, Danai Gurira (Black Panther, The Walking Dead).

This will mark the third time Nyong’o and Gurira work together. Prior to playing Nakia and Okoye, the badass women protecting T’Challa in Marvel’s Black Panther, Gurira wrote Eclipsed — the play that landed Nyong’o her first Tony nomination.

Speaking with Extra, Nyong’o revealed that the Americanah adaptation is her next project. The book follows the story of two young Nigerian immigrants, Ifemelu and Obinze, who face a lifetime of struggle while their love story endures.

Fans who saw these two were not allowed to take photos or come near.