Meghan Markle’s half-brother Tom has said he wants to ban his sons from attending the royal wedding in May, because they haven’t seen Meghan since they were babies. 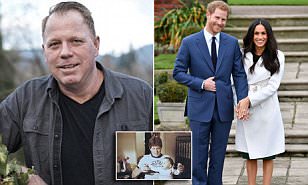 Meghan Markle’s wedding is due to be a star-studded affair, with the Obamas, her Suits co-star Patrick J. Adams, and Serena Williams rumoured to be on the guest list.

But the two relatives and their mother may not be in attendance after Miss Markle’s half-brother Tom intervened, saying that he wants to ban his two sons from going.

According to their father, Thomas, 26, and Tyler, 25, haven’t seen Meghan Markle since they were babies and he claims they’re just trying to cash in on the Markle name.

According to Tom, he and Tracy, his sons’ mother stopped living as man and wife three months into the marriage because the relationship was such a disaster. She never wanted the Markle name when they were married but now suddenly she acts like she’s still part of the family.

Tom said: ‘I don’t believe Tracy or my sons have the right to call themselves Markles. If this embarrasses Meghan then I am sorry, but Tracy can’t go on claiming to be a Markle’ .