Masekela was born in Witbank, a mining town in eastern South Africa and was given his first trumpet by the anti-apartheid activist archbishop Trevor Huddleston, who formed a pioneering jazz band in Soweto in the 1950s that became a launchpad for many of South Africa’s most famous jazz musicians.

In 1976 he composed Soweto Blues in response to the uprising in the vast township. 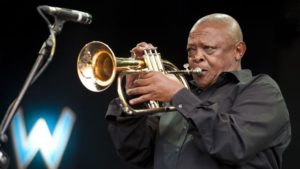 Masekela played and toured with major stars such as Paul Simon but continued his political engagement, writing “Bring Him Back Home” Nelson Mandela in 1987. The song became an anthem of the anti-apartheid struggle.

According to the trumpeter’s family, Masekela “passed peacefully” in Johannesburg, where he lived and worked for much of his life.

Masekela had been suffering from prostate cancer for almost a decade. He last performed in 2010 in Johannesburg when he gave two concerts that were seen as an “epitaph” to his long career.

South African social media has been flooded with tributes to Hugh, whose career and work was closely intertwined with the troubled politics of his homeland.

He is known to be survived by two children, American host Sal Masekela and Pula Twala.
May his soul rest in peace.

DADDY FREEZE INVOLVED IN ANOTHER CONTROVERSY