ADESUA ETOMI TO FEATURE IN “KING OF BOYS”

Talented film director and film maker, Kemi Adetiba has announced a host of talented actors starring in her sophomore movie, “King of Boys.”
The movie project was announced by Adetiba in 2017. 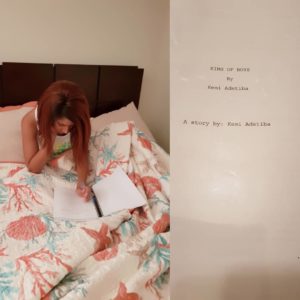 Adesua Etomi Wellington is one of the stars to feature in this movie. She took to her instagram page to share a picture of herself on her bed studying the script with the caption “character job”

“King of Boys” brings Adetiba together with Adesua Etomi and Sola Sobowale again, after they worked together in her directorial debut, “The Wedding Party.”

Kemi Adetiba’s directing debut and first feature film “The Wedding Party” was a success and it premiered at the Toronto International Film Festival (TIFF), as the opening film of the City-to-City Spotlight.This has made her a director to look out for .

Kemi Adetiba is keeping details of the upcoming film hidden, but with such an interesting cast, “King of Boys” joins the list of anticipated movies of the year.

We look forward to the movie “King of Boys”.

BISOLA AIYEOLA IS A YEAR OLDER