Timi Dakolo is a year older today, the popular Nigerian singer emerged winner of the inaugural season of Idols West Africa in 2007. 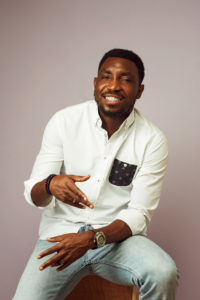 Timi Dakolo was born in Accra, Ghana to a Nigerian father, Bayelsa-native David and a Ghanaian mother, Norah, who died when Dakolo was thirteen.

Timi started singing in church at the age of twelve. In 2003 he joined the singing group Purple Love as a founding member. They dominated the Port Harcourt club circuit, but disbanded in 2005 as all its members had gained admission into the University of Port Harcourt. Around that same period, Timi won a local talent hunt contest G.E FACTO held in Port Harcourt.

In 2011, he released the song “There’s a Cry”. The music video was filmed in Nigeria.
Timi Dakolo was one of the Judges on The Voice Nigeria.
Despite being born in Ghana, Timi has a Nigerian passport and does not claim dual citizenship. He is loved by Nigerians and is known for his wonderful soul music.

He is married to his sweetheart, Busola Dakolo for whom he sang the hit song “iyawo Mi”. They have three children. Happy birthday to a great singer, Timi Dakolo!